Are we to be ruled by the maximum of what works is the rule?… or instead, do we find ourselves self destructive to a fault… are we a pleaser?.. a rebel… a colorist… a figurative artist?… do we have a preference for the easy out of the abstract… is it meaningless without meaning… are we a habitual narrator… an explainer… an explorer… solely reliant on the crutch of function for validation…

We unconsciously succumb to our born temperaments. Of upholding. Of obliging. Of questioning. Of rebellion.

We relax into strategies that engineer a projected image.

We play to our styles of attachment.

We actively individuate our self-identity with what we are doing, and describe our ideas with what’s been done.

WordPress.com is excited to announce our newest offering: a course just for beginning bloggers where you’ll learn everything you need to know about blogging from the most trusted experts in the industry. We have helped millions of blogs get up and running, we know what works, and we want you to to know everything we know. This course provides all the fundamental skills and inspiration you need to get your blog started, an interactive community forum, and content updated annually.

It’s mildly surprising, now that I’m sitting back in my chair, I’m seeing that world events have unconsciously influenced what happening on the sheet of paper taped to the drawing board. It’s not intensional, but there it is, looking right back at me.

There’s a need to try to do what we believe we can’t do, to entertain the notion that, while we may be bad at doing this or doing that, we can still, at very least, delight in the action of attempted realization.

There are multiple proven processes for mapping out a drawing and more than a handful of strategies for establishing proportions and laying in details, (still working my way through those lists). There’s also a recognition that there’s a game to be played, playing close to the strategies and rules while allowing oneself to wander freely off trail. The combination can create a discordance that’s felt more acutely than playing more strictly to what’s been prescribed.

I enjoy the hurky-jerky sketchy quality of “eyeballing” a figure together. The lining up of details is of secondary importance in comparison to the juxtaposition of fields of value.

It’s a strategy that leads away from accuracy, landing somewhat closer to a mood. Still… it does feel that this viewpoint in an attempt to post rationalize the misplacement of puzzle pieces or to validate a “lazy” attitude towards drawing, but there is a charge that comes with making a mess on a piece of paper and drawing my way out of it. It’s much more interesting to my sensibilities as a viewer than an blind faith acceptance of the cult of accuracy.

The assertion is that the directional movement across a frame can imply the passage of time and it can also give insight to whether the artist is projecting into the past, present or future. A composition that looks towards the left implies remembrance. A figure that looks directly at the viewer suggests an involvement in the present, and a composition that moves the viewer to the right of the frame implies the looking to future.

A room held secret, holds the promise of the infinite to an open imagination.

In tedium, the tendency is to stick close to what is known as we gain experience, the experiences themselves reenforcing what we believe be true, and what we believe to be true is what allows the world to be more predictable and safe.

In the private space where we alone are tenet, inside our minds, everything is possible, truth itself falls away, and we dream. 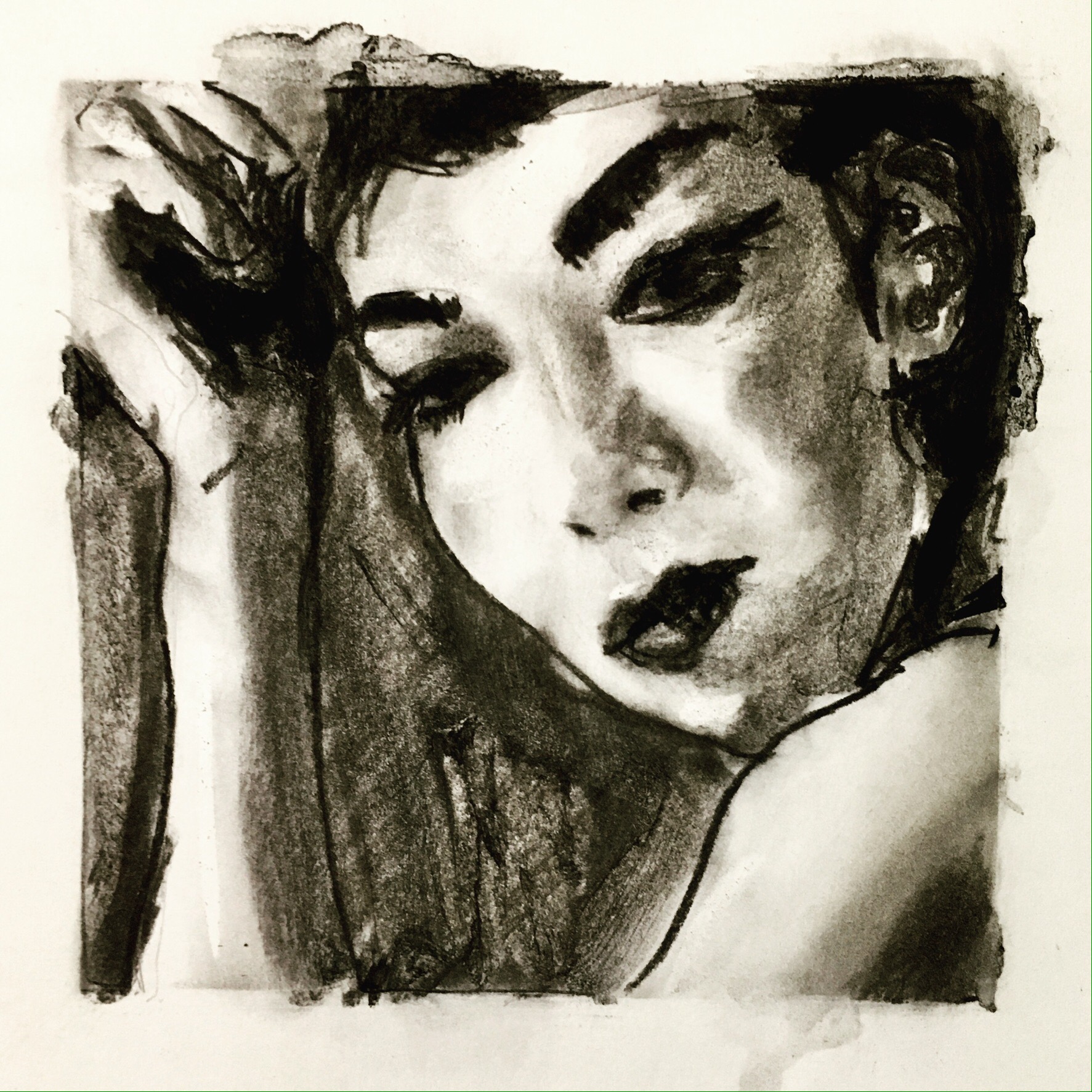 Admiration is attraction
Love is attunement

Relation without both feels hollow.

We can be attracted to a person, their personality, or their beauty, or their achievements, or their disposition to kindness, or all of it, but without attunement, without empathy, the attachment withers in the proximity of intimacy.

We crave to be in relation with growth.

Just as we unconsciously need this aspect in our interpersonal connections, we unconsciously look for these in the art that we are attracted to. A work can be many things, but one of the aspects that we value in art is work that we fall into a feeling of attunement with. A flow state of empathy and wonder from us. Work that pulls meaning from us. Work that shows us rather tells us.

Jess left me another “something” under plastic to play with. With the stress of the night, today was the day to make use of her gift. Just sitting down and pressing go gave my mind something to focus on rather than continuously hitting refresh on the news feeds tonight…. I can feel the stress in my chest.

There’s an aspect of a hand cut foot that attracts attention, how is this element affecting the larger whole… working to dissuade impressions of symmetry while bringing character.

I originally meant to turn the feet on this batch of work, the initial thought being that the unfamiliarity of look of a hand cut foot ring would dissuade new patrons from committing to choosing one for themselves. People often like looking at what is novel, but they seem to prefer to invest in what is already familiar. 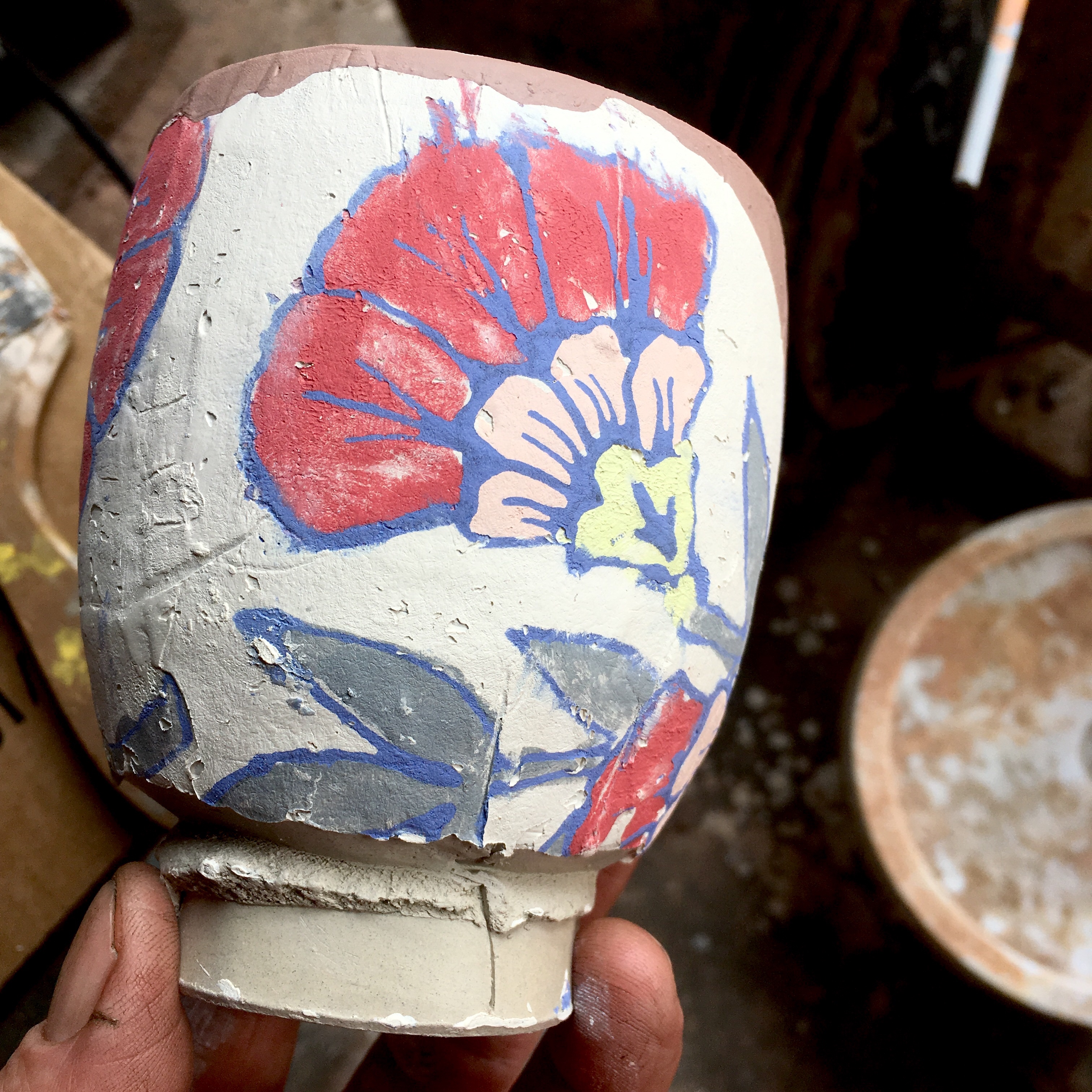 … And it may be true, but conversely, I believe that it’s more honest to be committed to one’s own sense of aesthetics by creating work that moves within that framework that excites the individual making the work.

It’s a romantic view that trusts that patrons are attracted to the commitment of the craftsmanship of an identifiable set of aesthetics. It’s also a stretch of imagination to believe that support follows interest.

But it’s also problematic to chase the assumed tastes of the patron.

A risk either way… but if a craft is developed to satisfy ones own developing set of aesthetics and standards, the work seems to gain a sense of consistency in quality.

At the moment, I enjoy the haptic qualities of these hand cut foot rings. I enjoy how they make me want to pick up the work and explore what I’m seeing. I want to feel all of those textures under my finger tips. For me, the feeling of controlled irregularity conveys a sense of comfort.

A cup is meant to be an intimate object. They need to be allowed to be just that. They are meant to have individual character. They are objects being made with the intention of being chosen, and they are as individualistic as the people that choose them.

The chime and chatter of a haunting melody, a standard sung of a moments loneliness, and the passing contentment of some colossal thing. We celebrate these in clay, fire, and stone, bringing to our lips a wish for a potential shared delight.

The question that’s chalked up on the board is, how does the continuity of a design arise from the interaction and resolution of multiple discrete points?

Yeah, well… although I don’t have any definitive answers, this series is taking a swing at this question by purposely attempting to swamp the eye with an intentionally busy design made up of many independent elements, a floral tangle of sgraffito cut directly into the clay surface covers the entire exteriors of the yunomi.

All the elements are being tied together into a whole by using rhythm, spacing, balance, line thickness, movement, and color – with the aim of tripping up the eye by using a density of the design to force a viewer to pause, engaging their attention, and drawing them in.

Being that the canvas (in this case a yunomi) is cylindrical, the designs essentially have the ability to lead into themselves. It’s a property that has already had a demonstrative ability to have an effect on the viewer, the premise being that as the design is followed, the mind relaxes.